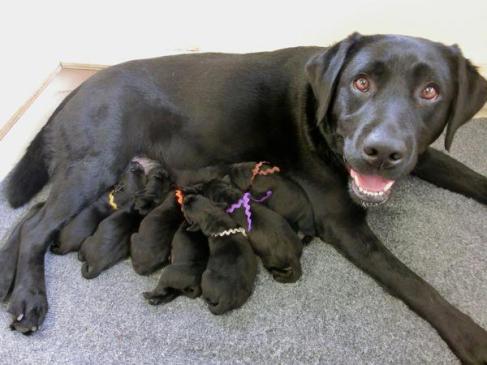 Bergin University has a litter of adorable black Lab puppies. (I know, puppies are all adorable, but I’ve always been a sucker for black Lab puppies.) The puppies started school last week. The puppies also turned four weeks old last week. That’s right. Four weeks. They’d had their eyes open for a full week before training started, so, honestly, I don’t know why the student trainers waited so long.

Sadly, there are still people who think that you can’t start formal training until a dog is a year old. Some more liberal people say that puppies can start training at six months. Then there are those smart puppy owners who get their pups into puppy kindergarten as soon as they can — usually once the pups are vaccinated. But even that is late. Puppies start learning the day they are born, if not before.

So why do people traditionally wait so long to begin teaching their puppies? In the history of dog training class that I am teaching this semester, the students have finally emerged from the cruel, punishment-focused training years of the early to mid-1900s. By the ’50s, people were starting to understand that so much emphasis on punishment actually got in the way of learning. A few trainers — Blanche Saunders, Winifred Strickland, and others — began incorporating praise and even rewards into their training! But the prevailing methods, up until the 1970s, were pretty harsh. Only older, stronger dogs could stand up to the punishment and the trainer’s lack of communication — and actually “learn” anything. Lots of dogs were deemed untrainable because they shut down or defended themselves by snarling or biting when treated harshly.

Fortunately for puppies and people who love them, trainers like Milo Pearsall and Ian Dunbar began teaching that, like young children, puppies are eager and quick learners. Furthermore, the younger they start learning how to learn, the better they get at it. In a sense, your puppy will be “smarter” if you train her early. These trainers introduced a now-popular and ubiquitous concept:  puppy classes.

Human parents of a new puppy can reduce the number of bad habits and undesirable behaviors the puppy learns by enrolling the youngster in puppy kindergarten. Here puppies learn what to do — and what not to do — and develop good manners early on, all without harsh punishment. Good puppy classes emphasize socialization — ensuring that puppies are exposed to lots of different kinds of dogs, people, sounds, sights, smells, and experiences — all in a controlled, positive way. This helps puppies learn that new things are not always scary, that their human families will keep them safe, and that the world is an interesting and fun place to explore.

So, back to my students. These special Lab puppies are future service dogs. Thanks to Bonnie Bergin’s enlightened early training, fewer puppies need to be “released” from the program, and more will become grown-up dogs capable of doing the work needed by their owners, who have disabilities. What these puppies are learning now will pay off: The tiny bits of mushy puppy food offered as a reward for sitting or coming when called are helping the puppies build two-way communication with humans. The puppies are learning to think and problem solve, which will enable them to become full partners to the people who will rely on their assistance. Training sessions are short — only a few minutes at a time for the little pups  — and fun.

The good news is that, nowadays, training that is fun is not just for puppies. Family dogs of any age can benefit from modern training approaches that emphasize positive reinforcement, rewards, and keeping training fun. Breeders can start working with puppies at four weeks; those “adopting” a new puppy at the ripe old age of eight weeks — or an older dog — can start as soon as the dog comes home. Your dog can start today. What are you waiting for?

Special thanks to Dearing English for the puppy training photos captured from her video of the first day of training. Puppies were four weeks and one day old.

3 thoughts on “Never Too Young to Learn”