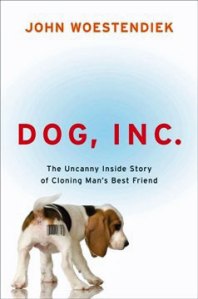 Journalist John Woestendiek’s Dog, Inc. traces the short history of dog cloning. Snuppy, the first “success, ” is not even six years old, after all. Woestendiek chronicles the dreams, heartbreaks, successes and many, many failures along the road to Snuppy’s birth and those of the clones who have followed. He describes the eccentric personalities and recounts the surprise of the first cloned cat, who looked (and behaved) nothing like the donor cat.

But the bigger story, what it takes to clone dogs, is what really makes this an important book: The hundreds of egg-donor dogs and surrogate mother dogs needed for each “success.” The invasive processes they endure — and their miserable lives in Korea’s dog farms and laboratories. The thousands of deformed and miscarried embryos and dead puppies. The 319 donors, 214 surrogates and astonishing 3656 implanted embryos that produced the first 16 cloned dogs and cats. The sad reality of the “extra” clones who, like Snuppy himself, have spent their entire lives in laboratory cages. Woestendiek draws a bleak picture of life for dogs in Korea, mentioning the hundreds of restaurants that offer dog meat on the menu and adding that the dog farms that exist to feed (literally) the demand are also a source of cheap egg  donor and surrogate mother dogs.

While Dog, Inc. gets off track sometimes, the writing is engaging and captures the full range of human foibles. It’s narrative journalism at its best. The story, though, is horrifying. How can anyone who loves dogs — or even anyone who loves his or her own dog beyond all reason — stomach the process of cloning dogs?

Woestendiek effectively debunks the usual rationale — that they’re going to get their beloved dog back. Cloning is reproduction, not resurrection. It creates an identical twin — same genes, different personality and behavior. Scientist Mark Westhusin, comments that “People get attached to their animals, and they want to sometimes see more than is there …”

This attachment is why people have been willing to fork over $150,000 for a clone of their beloved pet. Sometimes they get more (or less) than they bargained for. The owner of Booger, a pit bull who was cloned, ended up with five clones who fought with each other and her other dogs. “All I was trying  to do was have my Booger back … I have to say that cloning ruined my life,” she said to Woestendiek in one teary phone call.

While preying on the emotions of their wealthy clients, the scientists involved also reveal their true motivations: the drive to do something no one else has done, national pride, the potential for a lucrative commercial venture. These scientists are not cloning dogs out of love for dogkind. One produced 19 fluorescent green beagle pups. Why? Because his rival had produced glowing red beagle pups. Creating monster dogs for fun does not justify the pain and suffering these scientists cause.

Dogs, Inc. describes the current state of dog cloning and hints at its future. Will Korea’s commercial cloning venture take off of wither away into deserved failure? Woestendiek doesn’t prophesize, but this reader hopes that people who truly love dogs will see cloning for the travesty that it is and instead devote their time, love, and dollars to the millions of deserving dogs we already have in this country.

4 thoughts on “Dog, Inc.: The Uncanny Inside Story of Cloning Man’s Best Friend”