Skip to content
HomeInside of a Dog: What Dogs See, Smell, and Know 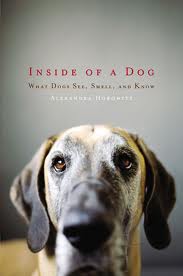 A longtime New York Times bestseller, Inside of a Dog by Alexandra Horowitz clearly has mainstream appeal; it is thoroughly enough referenced and indexed to appeal to canine professionals as well. The author, a psychologist and animal behaviorist, is no stranger to scientific research, and is a lifelong dog owner and dog lover.

The book is informative and entertaining, and it offers insights that will promote greater human understanding of dogs. It concludes with a strong chapter that suggests ways humans can relate better to the dogs in their households. The book also does an outstanding job of describing dogs’ sensory experience of the world, devoting nearly 100 pages to the subject.

But in its claim to present the canine perspective, the book gets a mixed review. Horowitz does decode some situations according to a canine point of view — her discussion of doggy raincoats and the way that their tight embrace might make dogs feel “subdued” rather than protected is an amusing example. But in other examples, a strong anthropomorphic bias comes through. For instance, after lengthy and well-done sections describing dogs’ vision and how it differs from humans’ and explaining that smell is dogs’ primary source of information, Horowitz attributes her dog’s hesitance to enter an elevator to age-related deterioration of her vision or difficulty adjusting to low light after being outside. These are both reasons a human might hesitate. Possible reasons that consider dogs’ experience of the world — that the crevice between the floor and the elevator harbors many strange smells or an unpleasant memory of the moving floor (though this is unlikely in the case of Horowitz’s apartment-dwelling dog) — are not mentioned.

Horowitz displays her scientist roots in her reliance on research studies to draw conclusions, even when the studies are poorly designed, and even when real-life experience points to different conclusions. A study of dogs’ reactions to “emergency” situations is a prime example. In this study, humans set up a highly contrived scenario, first having owners introduce their dogs to a “friendly stranger” and then having the owners feign an emergency — a heart attack, for example. None of the dogs who were tested did what the humans wanted them to do (seek help from the “stranger”). Calling this a “clever” experiment, Horowitz draws the conclusion that dogs “simply do not naturally recognize or react to an emergency situation.” A more obvious conclusion, and one that gives more credit to the dogs’ intelligence, is that the dogs could tell that the people were faking — none of the scents and signals that indicate true alarm or physical dysfunction would have been present in the “actors.” Some dogs do, in fact, react to emergency situations, even when they have not been specifically trained to do so.

Horowitz relies exclusively on some studies that dogs “failed,” such as the mirror test for self-awareness and a test of whether dogs felt “guilt” if they “stole” a treat, in arriving at her limited conclusions about doggy consciousness and self-awareness. She fails to acknowledge (or notice?) that the tests cited are anthropocentric in design — that is, they test things that are relevant to people but not to dogs — and were conducted in unfamiliar, highly controlled environments where the dogs’ behavior would be far from natural. Other research showing strong evidence of dog self-awareness is not mentioned. Finally, and despite a section at the beginning of the book chiding scientists’ tendency to see one animal as representative of a species, she makes many broad statements about dog behavior that seem to be based on her observations of her one dog.

Overall, the book provides an excellent description of dogs’ sensory perceptions of the world and a wonderful guide to improving our treatment of dogs, but I think that its conclusions about dog behavior, consciousness, and self-awareness are questionable.

2 thoughts on “Inside of a Dog: What Dogs See, Smell, and Know”