In last week’s post, If Cali Were Brian Hare’s Dog…, I mentioned Dognition. What is it?
First: full disclosure. Jana and I were among the beta testers of the site, for which we received no pay, but Jana did receive the bandanna she’s shown wearing above. This is not a paid post or advertisement. It is my opinion, based on my experience with the site.
Brian Hare, whom I wrote about last week, is the co-founder and chief science officer. Dognition is a site that studies canine cognition through a series of games and experiments that site members do with their dogs, at home. The Dognition team includes some innovative canine cognition researchers. It is a clever way to gather a huge amount of information about a large variety of dogs. It’s also (usually) fun.
The initial set of games and exercises creates a “profile” of your dog. There are nine profile types, ranging from the “Ace,” a problem-solver with strong communication skills, to the “Protodog,” who, according to the brief description on the site, is “reminiscent of the first dogs that began their relationship with early mankind.” I am guessing that that’s a nice way of saying “can’t follow human gestures.” The writers on the site excel at couching bad news (“your dog flunked this test”) in very positive terms. 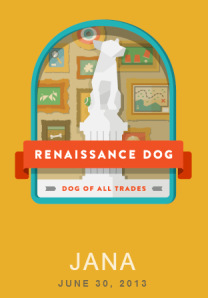 Jana is a Renaissance dog, good at a little bit of everything. I never finished the profile exercises for Cali, though.
The reasons are, I think, the site’s biggest drawback: Nearly all of the games require two people, and they are very hard to do alone. The site steps you through each set of exercises, and you have to enter information about your dog’s response before getting the next prompt. Another drawback (especially for multiple dog households) is that the exercises are repetitive.
I get it. They want data that they can use. They usually have a baseline exercise, which you do a few times, then the real one, which might have a few variations. For example, you might put a treat under a cup while showing the dog where it is. Then you might introduce a second cup, but still show the dog where the treat is. Then you might pretend to put treats under both cups but point to the right cup. Then you have someone hold the dog where she can’t see you and you hide the treat and point to the correct cup … you get the picture. You do each step three to five times. Jana can lose patience. When I am testing one dog, the other rapidly loses patience as she waits (and waits, and waits) for her turn. And I don’t have a second person here to cover Jana’s eyes or whatever else is needed.
So, those problems aside, I have learned a lot from Dognition. The site includes lots of articles and information on canine cognition. They do a good job of explaining the science behind the games and the profiles. And they send occasional tips, games, and suggestions that can be done by one person. I’ve gotten some great ideas for games to play with Jana and Cali and experiments to do with my students and their dogs. And I enjoyed finding watching Jana’s progress through the exercises. I’m curious about how much usable data the Dognition team has gathered and how they are using it.

One thought on “What Is Dognition?”