I am teaching a class where students attempt to analyze dog-human relationships from the dog’s perspective. I asked them to think about what dogs would want the world to look like — what dogs dream of, what the future would look like if dogs’ perspectives were given equal weight to humans’. We also looked at what several writers and editors have published as their versions of dogs’ dreams, hopes, and aspirations.
Looking at the work was informative. Much of the published work that claims to represent a canine viewpoint is undeniably anthropomorphic. Products, too — though designed for dogs, they are things that no dog would ever want. Shampoo with an overpowering, sweet fruity scent, for example.
Or Dog TV, a channel created for your dog to watch while he’s at home all day. It’s carried by several cable companies. Several of the examples we looked at described dogs’ desire to have thumbs so that they could control the remote or their desire to lie around dreaming all day. Dog TV was created for people who see dogs as furry little couch potatoes.
Another common theme is taking charge. One image from 21st Century Dog, a collection of dog-centered prophesies, appears below. 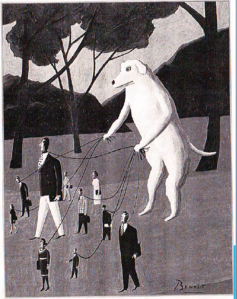 In a similar vein, several students channeled dogs who lived in a leash-free world where humans addressed their every whim or in homes where the dogs ate at the table while the humans curled up underneath. But, benefitting from an in-depth understanding of dog behavior, relative expertise on dogs’ health, well-being and psychology, and lives immersed in all things dog, several students’ views of dogs’ desires seem to get closer to what dos might, actually want.
In a book that illustrates dogs’ dreams, dogs dream of large, ornate houses, trips to Paris, and huge collections of shoes. Not likely, unless those shoes were for chewing.
Yet all is not lost to the hapless dreaming dog. Several students’ dogs dreamed of more doggy things — endless balls, growing on plants in their yard; freely available and dog-appropriate food (they are also studying canine nutrition); being free to dig, roll in the mud, and drink from a bottomless water bowl; enjoying a private stream where they could catch fresh fish.
Others envisioned a world where, rather than one species ruling another, the partnership was more even. Humans would understand their language and they’d get as much attention and company as they wanted. Dogs would not have to wear clothes; could go out to pee whenever they chose; would not be forced to interact with dogs whom they disliked; and bed-sharing would be negotiated.
One student nailed it by focusing on scent … another imagined dogs having the right to work in fulfilling jobs.
While we’ll never know for sure whether dogs dream of taking over or simply of a more equitable partnership with us, we can be sure that most dogs — like most people — want to use their intelligence and be challenged physically and mentally. Then, tired and muddy, we can all stretch out on the couch and fight over the remote.