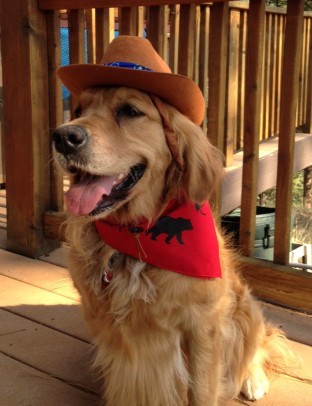 We’re back in Lolo, Montana for a couple of months after three years’ absence. I knew that Jana would be happy to be back. She loves splashing in the river at Fort Fizzle, where she found her first heart-shaped rock several years ago, and barking at the abundant wildlife.

But it is Cali’s first trip to Montana, so I was really looking forward to her reactions. Turns out Cali is even more of a Montana girl than Jana! She loves the huge play yard outside Deni’s house — her own private dog park! — where she races over the ground, feet pounding the dry dirt, after her beloved tennis ball. The dry, stiff grass and stubble don’t seem to affect her at all, though poor Alberta winces with every step.

Cali is enthralled with the bunnies, chipmunks, and squirrels and fascinated by the deer. So far, we haven’t spotted anything bigger than a doe with twin fawns, but for Cali, that was a major life event. Every car ride is a source of great excitement and even greater smells, as sits up, looking out the window, not wanting to miss a thing. And if, oh joy!, the window is open, she glues her nose to the window and whuffs deeply, taking in the rich mix of scents.

The house has the most perfect windows, which are very tall and reach way down to golden-retriever-nose level, so Cali can watch the birds soaring as she looks out over the valley — or bark at the deer and squirrels who wander into the front yard.

Best of all is her new friend Scarlett’s house. Scarlett, aged six months, has a huge yard with the greenest, softest grass Cali has ever seen! And a play pool. And so many flower beds to dig in when Mom isn’t looking … If only she could get into that fenced veggie garden, she could help herself to more of those delicious peas and squashes. Cali thinks that Mom’s being awfully stingy with them. What kind of mom refuses to give her kid veggies?

For the first time ever, Cali has tried out Jana’s routine of stretching out on her back and exercising her abs. Sure feels great in that cool, soft grass. Jana’s enjoying the grass, too. Her new spa routine is a soak in the doggy pool, a luxuriant roll in the grass, then an abs workout. A short nap in the sun, then repeat. All day long.

When Cali is not working out, she’s happy to join a chase game that she, Alberta, and Scarlett have invented. They race in big circles around that garden (the one full of forbidden peas). Then one stops and the other two keep running. They switch out a few times, changing direction occasionally. Finally, they stop running, always ending up with Alberta in the middle as tug toy; Cali and Scarlett each attached to one ear. So far, the ears haven’t come off, but I watch nervously every day …

Cali hasn’t even experienced some of the best Montana treats, like dog cones at the Big Dipper ice cream store or the very cold stream at Packer Meadows or hiking… everywhere. Even so, she’s already sure that she was born to be a Montana girl!