Skip to content
HomeBeyond Words: What Animals Think and Feel 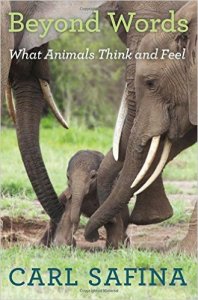 I’ve read a lot of academic studies of dogs and other non-humans that seemed silly, but I somehow missed this one, described by Carl Safina in Beyond Words. Safina pokes fun at a researcher who gathered and analyzed video of dogs playing for two years before reaching the somewhat obvious conclusion that when a dog wants to invite another dog to play, he behaves differently if the other dog is facing away from him: He tries to get that dog’s attention before offering a play bow. The dog either barks or uses his paw to attract the other dog’s attention. Dogs don’t play bow to other dogs’ rear ends. Amazing. (For more on this and what it can teach us, see Learning from Real Dogs.)

In ridiculing this and other studies, Safina makes the point that researchers should get out of the lab and watch how real animals interact with members of their own and other species. There is much to love in Beyond Words: The sections on elephants, wolves, and orcas are chock-full of detail, stories, and heartbreaking information about how badly humans screw things up when we don’t understand other species. I’ve written about his discussion of self-awareness and the mirror test. But my favorite section, naturally, had to do with dogs. He writes engagingly about his own dog when he takes on the controversial issue of whether dogs (or any non-humans) have “theory of mind.”

Safina offers several definitions for theory of mind drawn from real studies. My favorite is the one that claims that theory of mind is the ability “to read the minds of others.” Based on the divorce statistics and the number of wars and conflicts of all sorts, it seems that all humans would fail that test. A better definition is “knowing that another can have thoughts that differ from yours.”

Safina provides many, many examples of non-humans, including dogs, showing that they meet this definition; he calls the evidence “blinding” (his emphasis). Any time your dog anticipates your behavior — putting on those shoes means a walk — or asks for anything, like a belly rub, treat, or dinner, your dog is showing that he understands, or at least can make a plausible guess at, what you are thinking or planning and might even be able to influence your decision. Any time a dog fakes you out (or another dog) by playing keep-away with a toy or takes advantage of your inattention — barking while you are on the phone, for example — your dog is demonstrating his mastery of theory of mind.

Safina also takes on the definition of self-awareness, as well as other traits or abilities that some scientists, absurdly, continue to insist that only humans possess, skewering the human-centered irrelevance of the “tests” that purport to demonstrate other species’ lack of these abilities. A thorough discussion of humans’ penchant for believing things that we know not to be true versus non-humans’ evidence-based actions and beliefs leads to his conclusion that “maybe more than anything, what ‘makes us human’ is our ability to generate wacky ideas.”

2 thoughts on “Beyond Words: What Animals Think and Feel”