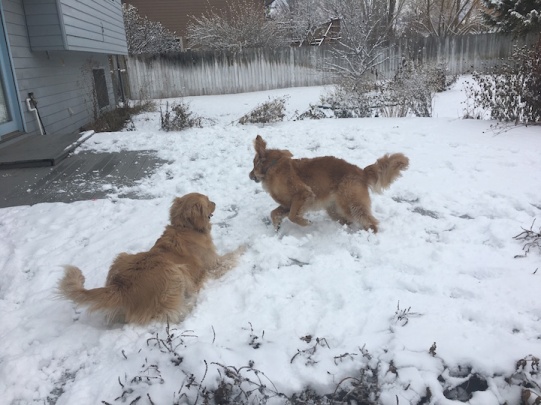 On the fourth night of Hanukkah, Cali got her wish: Snow. Fluffy, white, untouched-by-dog-paws snow.

It started snowing in the afternoon, and she got a little taste of it on our afternoon walk, but not much had accumulated. I went out to a dinner party and got home a little after 9. I put on my boots, put Cali on her leash, and gave her the best present of her life. We walked a bit, then I just dropped the leash and let her run. There was no one else out, no cars moving in the parking lot, and the space between two apartment buildings was so inviting. All that new snow!

As she has on encountering open spaces before, Cali ran crazy circles and figure eights around the picnic tables. She did something a little different this time, though: Every couple of circuits, she’d bound over to me, play bow, dance a little, then take off again. I scooped up snow and threw it in the air. It was so dry and powdery that I couldn’t make a snow ball to throw, but Cali caught the flying snow and licked it from her nose. She plowed into the snow on the ground with both nose and paws. She ran more laps around the picnic tables.

The next morning, we visited our friend Scarlett (who has a back yard!) and both girls ran around and around in the snow. We played ball in the snow, too. The snow is still here (Cali doesn’t know it yet, but the snow is likely to still be here weeks and months from now…) and she still thinks it is wonderful.

One thought on “SNOW!”