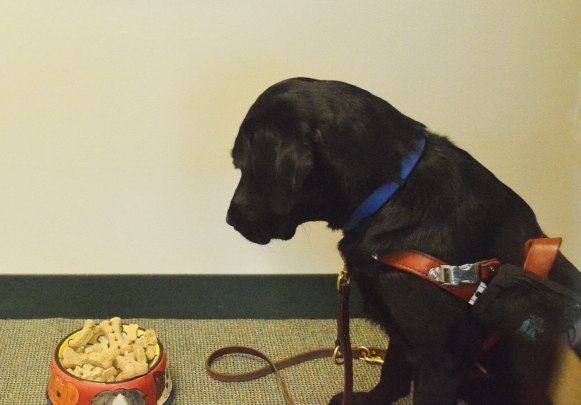 Deni and I were delighted that both Alberta and Koala did well on our cleverly designed doggy version of the marshmallow test — a well-known study of self-control and ability to delay gratification.

Based on hundreds of pages of research papers, magazine and newspaper articles, and books, I was convinced that the test indicated sterling character and hinted at characteristics that led to success in life; after all, follow-up studies showed that the kids in the early marshmallow tests who had showed self-restraint did have better outcomes in life in many areas.

Turns out that’s not what the marshmallow test shows at all. A much larger study, released last spring (an article about it has been buried since then among other things I need to read) shows more nuanced and interesting results. But the bottom line is, Alberta and Koala aced the marshmallow test because they had privileged puppyhoods and superior educations. (Cali’s self-restraint is, of course, due to her excellent breeding and sterling character; she grew up in a converted barn in western Sonoma County and was home-schooled.)

The new study, “Revisiting the Marshmallow Test: A Conceptual Replication Investigating Links Between Early Delay of Gratification and Later Outcomes,” as well as several other recent studies, points to socioeconomic background as a key influence on both ability to delay gratification and successful long-term outcomes like job security and ability to save for retirement. The mom’s education level was a fairly reliable predictor of the kids’ outcomes; kids whose moms had college degrees fared better throughout childhood and beyond, regardless of their marshmallow test results.

Basically, kids from better-off homes have more food security; they know that if they miss out on the marshmallow now, there will be more marshmallows or other treats later, whereas kids from lower-income homes might not get treats — or even meals — as reliably.

Since Guiding Eyes for the Blind has a wonderful puppy raising program, as well as enrichment that begins pretty much at the moment of whelping, neither Alberta nor Koala ever had to worry about a lack of meals and treats. Both of them had excellent educations, as did their parents. They were set up for success.

A dog doesn’t need to be from the elite 1 percent to succeed in life, though. As puppy parents, we ordinary dog-owning humans can set our dogs up for success, too, by offering them a predictable routine and nutritious meals on a regular schedule, training them (with lots of treats), and meeting their needs. Cali aced her pseudo-marshmallow test; your dog could ace the marshmallow test too!

One thought on “The Marshmallow Fallacy”