Skip to content
HomeWhat You All Want to Ask

The night before their cruise, many of the 29 guide dogs teams stayed at the same hotel. These dogs got a head start on greeting old schoolmates, as their humans met or caught up. Many of the teams had been at the Continuing Education Seminar couple of years earlier, or had been in training together, or had met at other events.

The next day, the teams, along with several hundred other passengers, boarded a huge ship. Naturally, they all wanted to know the same thing you’re now wondering: Where do the dogs go to … you know?

In the case of this group: Deck 10, near the front of the ship, just off the main elevator lobby. For some dogs, that was a very long trek from where they were bunking.

The crew set up about 10 potty stalls. Some were plastic containers topped with astro-turf. Others were large metal litter boxes with, yes, dog litter. Not to be confused with cat litter, dog litter consists of hard, absorbent pellets. The astro-turfed boxes seemed to collect the pee. In either case, the dogs’ humans were expected to pick up solid waste.

Ship staff did an admirable job of keeping the place clean-ish.

“Ish” because of many issues.

Foremost, it’s windy on a moving ship. It’s hard to balance. The astro-turf rugs shifted in the wind. Some dogs flat-out refused to try the doggy port-o-potties. Others tried, but got rattled when the astro-turf rugs slipped and slid as they crouched. Many of the refusers visited the nearby deck floor instead.

Also, the human partners, coping with their own balance issues on the moving ship, along with their dogs’ skittishness and their inability to actually see where their dogs had eliminated, sometimes failed to thoroughly clean up.

Koala took it all in stride. She’d visit several stations, and, having caught up on the news, would take care of business without a fuss. 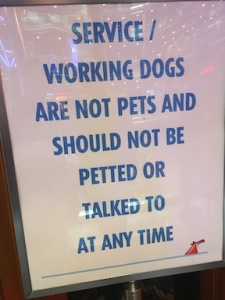 Carnival, the cruise line, deserves special mention for the ways the dog teams were accommodated. Outside each dining area, and in other prominent places, staff had posted large signs telling people not to pet or talk to the working dogs on board. Many passengers who talked to guide dog partners mentioned the signs or said they knew they weren’t supposed to talk to the dogs (though most proceeded to do so anyhow …).

The staff ran a private safety briefing for the guide dog teams, and the leader had clearly undergone training on working with blind people. His descriptions of how to find a life jacket, what the front and back would feel like, and how to find and secure the clasps and belt were clear and full of rich description. Each guide dog had her (or his) own life jacket!

Carnival even hired interpreters for members of the group who are have both visual and hearing impairments. Through the magic of something called protactile communication, the interpreters provided a more complete experience for these passengers. Protactile communication uses touch to convey information beyond an interpreter relaying what another person is saying; it includes description of what is going on in the environment and allows for deeper two-way communication.

One thought on “What You All Want to Ask”