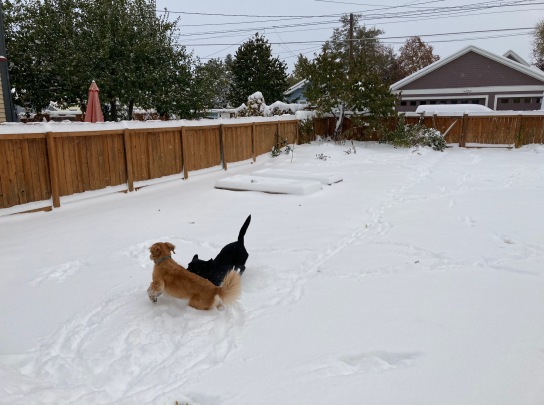 Koala is not a typical Labrador. Yes, she’s affectionate and cuddly and very, very food focused. But she’s also serious and rule-bound. She holds us to a schedule. She has no sense of humor.

She has her moments — she loves to play, but on her terms only. And she does love to stomp through puddles, but she’s not as eager to get into a body of water as most Labs. She’s usually indifferent to a ball tossed into the water. (Not Cali! Cali, a golden retriever, was born to swim after tennis balls. Over and over and over again.) Koala will fetch a ball on land, if you ask her to, but it’s clear she’s only humoring the silly human.

And Koala hates cold weather. She was born in Upstate New York and raised in Connecticut, so maybe by the time she moved to Florida, she was really just done with winter. At not-quite-2 years of age.

So, here she is in Montana, yet again. And yet again, it’s cold. It’s late October and … we had a blizzard. Somewhere between 6 and 8 inches of snow fell overnight.

When I opened the door to let Koala and Cali out in the morning, it was still snowing. She gave me her “are you nuts??” look, a look I know well. I convinced her to go out to pee. 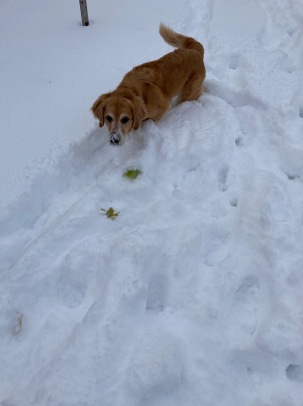 Cali was a bit worried when she went to her toy box and all that was in there was a bunch of white powder, but she nosed around a bit and located a frozen tennis ball. She gave me her look … and I ventured out, in slippers and robe, to free the frozen treasure and toss it for her.

And Cali was off, racing around plowing through the snow with her nose to find her ball. Dropping it into the snow so she could find it again. Begging me to come out to play …

Koala looked on in disgust.

I beat a quick retreat indoors.

Then I looked out the window: Koala was racing around the back yard and — what was that? A wagging tail?! She made a couple of joyful, very Labrador-esque laps.

She must have sensed me watching.

She glanced over her shoulder, stopped running, and started sniffing the ground. She did her business and quickly came back inside.

Her burst of typical Labrador playfulness, her flash of joy as she played in the snow disappeared as quickly as it appeared. But Cali and I both saw it: Koala’s inner Labrador.

One thought on “Koala Discovers Her Inner Labrador”