Skip to content
HomeJust Watching the World Go By 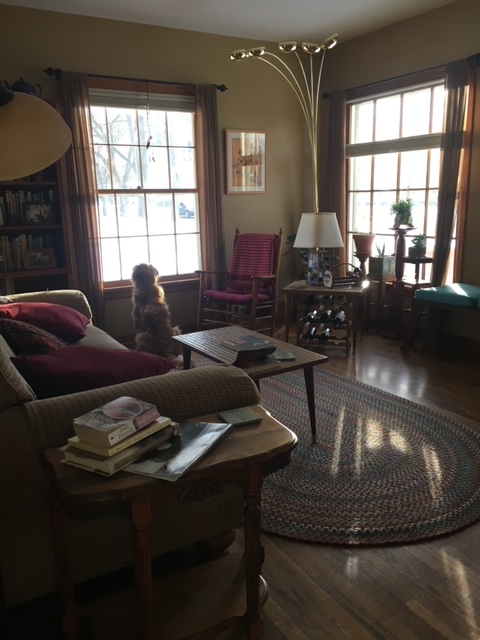 Dogs just want to watch the world go by. And interact with it sometimes. Some dog owners clearly understand that!

My first encounter with the idea of “fence dogs” came while my friend Ken was spending a few weeks in Missoula this summer. The fence between his AirBnB and the neighboring yard featured an odd window. The purpose of this opening quickly became clear on his first morning there, when a fuzzy canine head appeared.

It turned out that there were three “fence dogs” who liked to visit, supervise the goings-on next door, get nose scratches, 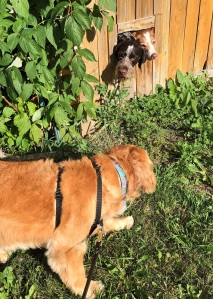 and occasionally bring Ken a tennis ball to inspect.

On a visit to Ken, Cali “met” the fence dogs — and probably wondered why her fence does not have such nice windows.

Several weeks after he’d left Missoula, I was reminded of Ken and the fence dogs when I saw an article about a family’s creative approach to letting their dog watch the world go by.

Then, just last week, I saw an even funnier post. These dogs apparently spy primarily on their mom’s comings and goings, and they have to line up just right with their viewing portals.

Cali, and occasionally Koala, also enjoy watching the world. They use the large window in my living room that looks out on the driveway — and gives them a great view of the road. Cali grumbles at people walking past, escalating to irate vocalizations when a dog dares to walk on her sidewalk. She looks out sadly, staring me right in the face, whenever I back out of the driveway in a dogless car. 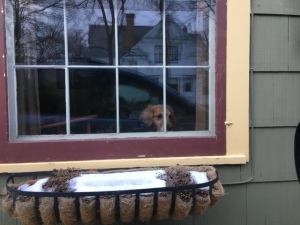 Cali just loves watching what’s going on, and dog-height windows were an appealing feature when I first saw what became our home.

She adopted this space immediately. I briefly put a bench with several plants in “her” window, partially blocking the view, and she let me know that this was unacceptable. Very unhappy, she paced, tried to peer out, gave me dirty looks. I soon moved the bench.

I don’t like walking past yards where dogs fence fight or go ballistic, barking and lunging as I pass, especially if the fence is mostly open. But I think there is a balance. For dogs who can handle the stimulation (and who are supervised and brought indoors when they bark at neighbors), a fence window (or an actual window) is a great idea! Dogs are curious about their world and, for the most part, their lives are contained. Many dogs spend a lot of time at home with no access to see or even smell the outdoors. If we can offer them a way to watch the world, why not?

One thought on “Just Watching the World Go By”