Thoughts of Dog is more than a book or a calendar. It’s a peek into the mind of a loving, sweet, sometimes silly golden retriever and their human. The dog, who is nameless, has a constant companion named Sebastian (Sebastian is a stuffed elephant). Dog also has a human of course.

That human is named Matt Nelson.

And they are simply brilliant.

Nelson got started sharing his uncanny dog wisdom a couple of years ago (don’t know HOW I missed it …) with “We Rate Dogs.” You can see some examples on this blog post: 50 Times People Asked To Rate Their Dogs, And Got Hilarious Results. 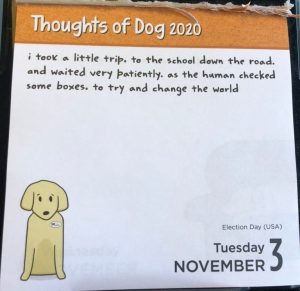 I first heard of Thoughts of Dog when a friend shared a page from last year’s calendar. I immediately ordered the 2021 calendar.

Highly recommended whenever you need a lift or a laugh.

I was excited about reading Alexandra Horowitz’s latest dog book. She’s the person I want to be when I grow up, after all … But, though I enjoyed it, I was also a little bit disappointed.

Her best work so far — aside from her academic papers — is Being a Dog, with its deep dive into the world of scent and how dogs experience it. Our Dogs, Ourselves lacks the insights into dog-focused science I hope for from Horowitz. It also shares little of her fascinating and groundbreaking work in dog cognition.

It’s about life with dogs. Mostly, her life with her dogs, with a few broader forays into the lives of the rest of us and our dogs — or at least the dog-owners she encounters in her New York City life with dogs.

While much of the book reads like a collection of blog posts or short essays, a couple of chapters explore larger, more serious issues. These chapters, in my opinion, redeem the book:

Overall, there’s enough strong chapters that I do recommend the book — it’s a fun read in parts, more serious in others. But, if you’re expecting a more scientific look at dogs, stick with Being a Dog.

A friend recently forwarded me this column about grieving the loss of a dog.

It’s so true that losing a dog can be harder than losing a human family member, as friends and relatives who’ve recently lost dogs (recently = in our lifetime) can confirm. I still miss my Jana, after a year and a half.

Why is this so hard to bear? As the column-writer notes, dogs are more intimately part of our lives than most of our human friends and even relatives. Other than a longtime spouse, your dog is probably the person (yes, dogs are persons …) who has spent the most time with you, seen you at your best and worst, and who knows you best. I’d argue that dogs know us better than any human can, since they can read so much more of our body language and, in most cases, read our minds!

They’re also great company. Sure, Cali sulks when I won’t share my dinner and huffs and stalks off when I pick up my phone. But she — and most dogs — offer largely uncritical companionship. They’re easy to be with, comforting when you’re having a hard time, and always up for some fun. They never, ever try to talk you out of a late-night ice cream binge, for example — or, to be fair, a long hike.

While non-pet people may never understand why the loss of a pet is so hard, pet people should know that there are many, many people who do understand. And who also know that even when, as many of us do, we get a new dog, we’ll never fill the hole left by the ones we’ve lost.

This column is dedicated to Hannah and Ziggy, my sister’s dogs (pictured with Cali, Jana, and Alberta) who passed away in February.

We all know that our dogs love us, right? It’s not enough to know that, though; researchers have to prove it. Fine. First we had the wonderful Dr. Gregory Berns and his MRI studies that showed that the pleasure center in dogs’ brains lights up when they catch a whiff of a familiar human. Then we had oxytocin studies that showed that a meaningful gaze is also therapeutic — for dogs (more about that in a future post). Now, my favorite: A study showing that dogs will actually learn and perform a task for what reward? A chance to spend a minute with their person.

The study was published in the fall issue of the Journal of Applied Behavior Analysis. Titled “Application of Functional Analysis Methods to Assess Human-Dog Interactions,” the study itself if a tough read. Do yourself a favor and read Dr. Stanley Coren’s “translation” in his column for Psychology Today.

The study only looked at three dogs, so it is not exactly definitive. But these dogs were tested on several different scenarios. First, they learned to perform a task that would open a door and allow them access to a room where their human was sitting. They actually figured out — taught themselves —a task, then performed it over and over again, just to get to be with their humans. They could hang out with (and be petted by) their person for one minute, then they were taken back to the room.

Initially the room was bare and boring. But then the researchers upped the ante. They gave the dogs some toys. Later, they added the dog’s favorite bed. In each case, performing the same task would let them out and give them access to their person. Yes, they chose to leave a relatively comfortable room and their toys to be with their humans. One dog had a harder time leaving the toys than the empty room, and one of the dogs chose not to leave the comfy bed.

The next level test put the people and dogs in the same room. Now, the dogs had no bed, no toys, and a human who was working on a computer. The door was open; the dogs were free to head to their toys, their beds, out. Yet, even though the person wasn’t paying paying any attention to them, the dogs showed a preference for being with their person. They stayed, rather than head to a more stimulating place.

Remember, this is a very small study. But it tracks with my experience of living with many dogs over many years, and spending time with dozens (hundreds?) of dogs whom I knew well but did not live with. It also lines up with our understanding of dogs as great therapy visitors, empathetic creatures, and just plain good friends.

I live in a tiny apartment, but, in addition to the living room where I spend much of my time, the dogs have access to the yard most of the time, a bedroom (with very comfy dog beds), and the kitchen and bathroom,which offer a cool floor in hot weather. The vast majority of the time, Jana chooses to be in whatever room I am in. She gets up and moves if I do. Even if I tell her, “Don’t move; I am coming right back,” she goes with me. In fact, ages ago, tiny 7-week-old Jana attempted a huge flight of stairs when I ran upstairs to get something and she just didn’t want to be left alone for even a minute.

Cali is less consistent. If I move, she always comes to see if something fun is about to happen. But she often likes to nap on my bed or hang out outside when I am working in the living room. Even then, though, she comes and checks in very frequently.

This study seems to say that dogs enjoy just hanging out with their people. I am happy to know that. The more time I spend with dogs, the more I appreciate the true friendship between us; it’s nice (though not necessary) to see research studies confirming that this bond is valued by dogs as well. 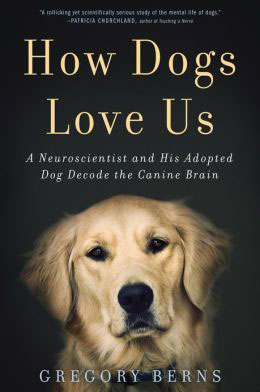 Gregory Berns got the crazy idea of training his dog to lie still in an MRI machine, in the hope it would provide some insight into dogs’ thinking. What he found brings scientific proof to something every dog person knows — that dogs read us, anticipate our behavior, and act on that knowledge. Dogs, in short, have theory of mind. Berns rightly argues that this scientific evidence must change the way we think of and treat dogs.

What’s especially wonderful about this story is that, at least at the beginning, Berns is not an especially savvy dog person. He loves his dogs, treats them extremely well, but hasn’t spent a lot of time trying to communicate effectively with them or train them. By the end of the book — or maybe by a few months into the research — he’s become convinced that dogs communicate and function on a very high level and that “the key to improving dog-human relationships is through social cognition, not behaviorism.” Quite a journey … in fact, it’s the same journey that I hope to push my students along in Bergin U classes on dog training, canine-human communication and understanding the dog’s perspective. (Any current Bergin U students reading this might as well order their copies now … this book is destined to become required reading in all my classes.)

The book is filled with fairly complex scientific concepts, but it is written beautifully and clearly. It is very easy to understand and, like a good adventure novel, pulls readers along with foreshadowing and suspense. I especially love the long discussion of the ethical issues Berns and his team faced in setting up the research and the insistence of all the human researchers that the dogs would always be free to opt out, at any time. I also love the dog-centric approach the research takes (read the book to find out what I mean!). This book — this whole research study —is a testament to the amazing possibilities that exist when humans acknowledge their dogs’ abilities, treat them as partners (rather than as property or as slaves), and engage with them in a respectful, positive manner.

Because I am nut for precise language, I do have to quibble with the title. Berns does not actually show HOW dogs love us. He does show, I believe, that they DO love their human family members. While he can’t really show us what dogs are thinking, though, he has shown a way to understand their likes and dislikes — and perhaps opened the door to a better ability to read in dogs other emotions that humans and dogs share.