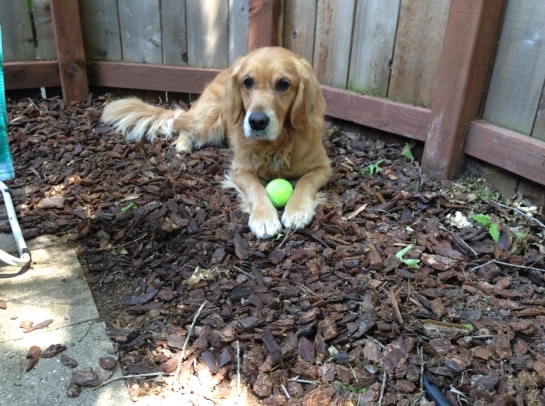 As Cali and I were walking to the park, we saw a woman with a small terrier-looking dog. I said hello and she did too. Cali was taking a long sniff of the grass near some trash bins, so I moved aside to let them pass.

As we walked behind them, I noticed that the little dog kept picking up his rear right paw. He had impeccable leash manners, which means that the woman wouldn’t be able to see his back paws, since he was walking right next to her (paying attention, Cali?). Also, despite a lot of rain this winter, dry season has arrived. Stiff grass stubble is everywhere, as are foxtails. Cali comes home from walks full of tiny burrs. In other words, prickly things that could easily get embedded in a paw are everywhere.

So I said to the woman, “Your dog is picking up his paw; he might have something stuck in it.”

Is it me or was that an oddly hostile and/or defensive response? Quashing the impulse to say something defensive in return, I said, “I thought he might have a thorn or something in it. That happens to my dog a lot around here.”

She softened a little, I think, and told me that her dog has a congenital knee problem and that’s why he does that.

But, really, is the assumption that I am criticizing your parenting the go-to response for most people? That’s a sad comment on society.

Or maybe it is me. Because, a few blocks later, we encountered another dog walker. As I tend to, I detoured into the street to avoid passing close to an unfamiliar dog on a narrow stretch of the sidewalk. The other walker said, two or three times, “He’s friendly.”

When we were closer, I said, “My dog is nervous around unfamiliar dogs.”

All perfectly normal … except the implication that I was assuming negative things about her dog. Do I radiate an air of disapproval and judgment? (Please do not answer that question.)

The last encounter in this bizarrely social morning was at the park. This time, Cali was the jerk, running off an overly friendly poodle who showed too much interest in her ball. The joke was on Cali, though, because, while she was running him off and then I was reprimanding her, Maui, a dog Cali used to consider a friend, actually stole her ball. We beat an embarrassed retreat before she could challenge Maui to a duel.

I am going back to 7 a.m. walks; the park is empty and the other dog walkers are also trying to avoid dog encounters. That all makes it easier to avoid offending the entire dog and dog-owning population of Petaluma. 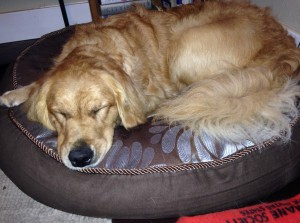 Cali turned two recently, so by some definitions, she is an adult. I had this fantasy that, at age two, she’d “click in,” showing maturity and leaving behind the seemingly endless adolescent phase.
Hasn’t happened.
But all is not lost. She is showing signs of growing up.
For a couple of weeks now, she’s been trying very hard not to pull on the leash when we are walking to the park where we play every morning. She has excellent leash manners on most regular walks, but she’s so excited about the park that our morning walk there has been a constant struggle.
I repeatedly stop and ask her to stop pulling. She bounces into position next to me, then, within a few seconds, is out in front, pulling hard. As we walked, my patience would wear thin and my requests would grow sharper.
Then, a couple of weeks ago, I noticed that she wasn’t pulling so much as … well, vibrating. When Deni was here for a Thanksgiving visit, she asked why Cali was” bouncing like that.” Cali now walks out in front of me, but the leash is a bit slack and she bounces and quivers, and, every so often, moves back and walks next to me for a few steps. She is trying so hard not to pull.
Another sign of impending adultness is that she actually tried on her own, without being asked, to pick up her bowl after dinner this week. I’ve been trying to get her to do this, as Jana does, for months. The best she’s managed is to sort of lift it by one edge and drag it to my waiting hand. And that only happens if I have a really good treat in the other hand. But there she was — and, because of raging hotspots, she was wearing her cone — trying mightily to lift her bowl.
Finally, the best sign yet of maturity came yesterday. For a few months, every time our neighbors walk their dog, Ernie, Cali has barked madly at him. She does not bark when the people go by without Ernie. She is fine meeting Ernie in the parking lot or at the play yard, where they occasionally show up when we are there. But they walk Ernie a lot. Several times a day. And Cali has always done her crazy dog impression, barking her loudest, fiercest bark.
Until yesterday. Earlier, the other neighbors had returned from a walk with their two dogs, and both Cali and Jana let them know whose territory this was. I let them know how unacceptable their barking was.
About 15 minutes later, I saw Ernie and his people walking by. Dead silence from both dogs. Until I threw them a party. Good GIRLS! Lots of cookies!! Woo-hoo! When the trio came back from their walk, again, silence. This morning, again. Can it be that she has finally learned??
It’s easy to get frustrated at our dogs. And to assume that they know what we want them to do (or not do) and are disobeying out of spite. Or general badness. How many times have I told Cali that she’s the “baddest dog in the whole #$&^ town”?
But she’s not. And chances are, your dog isn’t either. They are trying. But it takes a lot of maturity and self-restraint to follow human rules that make no sense in a doggy world.