Our electronic dog door continues to be a wonderful window on the dogs’ personalities. The dog door is operated (ostensibly) by a magnet attached to each dog’s collar. The idea is that only animals with magnets can open the door, keeping out neighbor cats, possum, raccoons and the like.

Well, in one of Florida’s daily summer thunderstorms, the door suffered damage. The motor would hum but the door would not open. We summoned our electrician, ordered a part, summoned the electrician again, and, after a few dog-doorless weeks, were back in business. With a twist.

The door started opening and closing all on its own. We joked that not only had we acquired a resident ghost, but the ghost somehow had been given its own key and had learned to use the dog door. As I sit at my desk, not a dog in sight, the door will occasionally open and close. Then do it again a few minutes later. The ghost going out for a potty break and returning? Or the ghost entering for a brief reconnaissance and leaving? Hard to tell, since I can’t actually see the ghost.

Meanwhile, Cali, who learned to use the dog door in just seconds flat, has lost key privileges. She, it turns out, wants to spend all of her time outside chasing lizards. And occasionally catching them, with gruesome results for the lizard and anyone watching. She has recently taken up stalking those huge, bright yellow Florida grasshoppers that are apparently quite tasty. Her other hobby is digging small ditches all over the backyard. Some dogs, it seems, are too immature to handle the freedom a dog door brings. Unable to convince her to take up knitting, gnawing chew toys, or even sunbathing (with sunscreen!), I took her key away.

With no key, Cali has to ask permission to go out, and she now has supervised playtime. She hates that. She has figured out that she can sometimes follow her big sister Jana out. Occasionally, I think when Cali is being particularly, er, adolescent, I have seen Jana walk with her over to the door. Door opens; Cali runs out; big sis walks away with, I swear, a big smile on her face.

The next step was probably inevitable: Cali discovered the ghost. And decided to train it. She could get the ghost to let her out! Who needs a key when you have a trained ghost?

Now, when Cali wants to go out, she sits, patiently staring at the dog door. Eventually, usually within a couple of minutes, the ghost does, indeed, let her out. 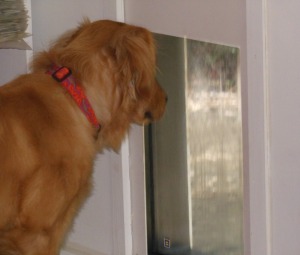 Cali has had less success at training the ghost (or her big sisters) to let her back in, however. When she gives up on the ghost, she’ll sit, looking sadly at the back door and occasionally jumping on the glass, until I let her in. Twice I have come home from errands to find her outside, stretched out in the shade, waiting patiently.

I haven’t seen her sitting by the dog door on the outside, waiting for the ghost. But she has gotten back in without my help on occasion. So maybe the ghost training is going better than I think.

Sometimes, when Jana or Albee opens the door to go out, Cali seizes the moment and slips in very quickly. Jana isn’t quite as agile as she used to be, and the door only stays open for about 5 seconds. So when Cali does this, Jana is left inside. As Cali enters and the door closes, Jana gets a perplexed look. I am sure that, as she waits for the door to open again, she’s wondering why she wasn’t lucky enough to be an only dog.

Cali, Albee, and Deni are playing fetch with a Zipflight (a Frisbee-like toy for dogs that Cali is crazy about). I wander over with Jana. Deni throws the disc. Cali catches it. Cali then brings it over and offers it to me for a throw.

If more than one person is in the area where Cali is playing fetch, she always does this. I find it charming. She takes the toy to one person, and then to the other, as if to include everyone in the game. She’ll include people she doesn’t know well, too, if they happen to be standing near and watching.

Oriel did this too. Cali and Oriel are closely related, but since Albee occasionally does it too, I don’t think genetics fully explains this behavior.

A professor I had in graduate school, ethologist Marc Bekoff, has hypothesized that play behavior forms the foundation of social ethics for a species. That is, youngsters learn how to get along in the group — what is “good” and “bad” behavior in their society, what the rules are for acceptable social interactions — at least partly through their games. They learn to play by the rules, not hurt each other, not to cheat or deceive, and to self-handicap when playing with younger or smaller friends. We observe all of this as our well-bred and well-socialized canines play with one another and with other dog friends. This might be a partial explanation, but Cali’s behavior seems to go a step farther.

I’ve seen dogs take turns in other situations — at the school where I teach, it’s not unusual to see three or four dogs lined up, waiting for a turn at the water bowl! And of course, when we play with our three dogs they must take turns chasing the ball when we throw it. Our dogs wait their turn to get their treats, to get brushed, even to get their dinners. Taking turns is nothing new in multi-dog homes. But dogs ensuring that all of the people and dogs get to join the game is unusual and shows an even higher level of social awareness. Cali’s not waiting for her own turn to do something fun or trying to get extra turns. She’s going out of her way, sometimes across a large lawn, to invite someone else to take a turn, to join the game.

It’s impossible to know exactly what motivates her to offer me a chance to throw the ball when she’s playing with Deni, but it does bring the family together. She even takes the ball over to Jana to offer her oldest sister the chance to chase the ball!  Cali’s desire to include everyone reflects something that matters to her. Empathy, or possibly inclusiveness.

At the ripe old age of not-quite-three-months, Cali made her first play for Jana’s job. She liked the idea of a paycheck, in the form of some treats, delivered as soon as the work was complete.

The newspaper was still bigger than Cali the first time she grabbed it and dashed off ahead of Jana. Reined in by a too-short leash, Cali was soon overtaken by Jana. Jana looked at her in annoyance, then reached over and snatched “her” newspaper back.

Jana’s held this job since she was a tiny pup, and she is not ready to retire.

Since that day, I try to get the girls to take turns, and I give each one a reward, but Cali still wants that job. And Jana is not giving up without a fight. Sometimes the paper bears the brunt of this literal tug-of-war.

Cali and the Sunday Paper

Dogs need jobs. Ever more, dogs need opportunities to earn rewards. But I think what is really at play here is that Cali looks up to — worships — Jana and wants to do everything that Jana does. Cali learns new skills very quickly and I am sure it is partly because she is watching what her adored big sister does and copying every move, albeit in her clumsy puppy way.

Still, I think the best solution might be a second newspaper subscription. 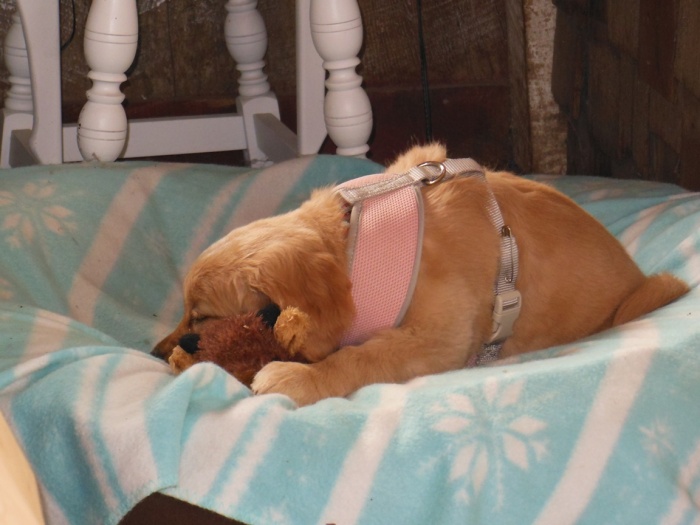 Our family is growing! Meet Cali, the newest member of the Hogle and Elliott household. Except, of course, she’s in California with me and Jana now, not home in Florida with Deni.

Single puppy parenthood is a challenge! Cali is wonderful about asking to go out when she needs to … but that means that I have to be quick to respond, whatever the time of day — or night. How do parents survive months of this? After just over a week, Cali is waking up pretty consistently around 1 a.m. and again between 4 and 5 a.m. The second time, I just let her cuddle with me until it is time to get up at 5:15 or 5:30.

Yes, mornings begin early with a puppy. She’s full of energy, happily greeting her toy box like a long-lost friend, bouncing from one end of the small studio to the other, trying to get Jana to play, turning somersaults, and generally being a puppy. All while I am trying to find the ON button for the coffee pot.

By the time dogs go out, dogs come in and wipe their feet, I build a fire in the wood stove and take a shower, dogs have breakfast, we all walk down to fetch the paper (Jana does all the work here), I have breakfast, we play, puppy goes out again … well, I am ready to go back to bed. And it is only about 7 a.m.

The good thing about puppies is, they take a lot of naps. But, many of these are power naps, which means that, after 20 short minutes, Cali is wide awake, full of energy, and eager to play. I, having tried to get 3 hours’ worth of work done during those 20 minutes as well as pay some attention to Jana, am less refreshed and eager to play. Sometimes, she’s lucky she’s so cute.

She uses her cuteness on others as well. At Bergin U, where I am teaching this semester, Cali has charmed the students, staff, and volunteers. She is easily the most popular girl on campus. The benefit for me is that, the more people who come play with her, the more naps she takes! In fact, she’s taking one now, having been thoroughly worn out by a dedicated volunteer who drove in from more than a half-hour away — to play with Cali!

I was a little worried about her the first few days she was home. She didn’t show much interest in eating and even left food in her bowl! She has adjusted quickly, though, learning the attraction of food-filled Kong toys, solving her Brainy Bone puzzle (to get at the hidden Charlee Bear), and begging for meals and training treats.

Speaking of training, this puppy is clearly a genius, well on her way to learning several cues and tricks. I think she’s a lefty; she shakes with her left paw about 3 times out of 4. She’s got a nice “sit” and is catching on to “down,” “turn,” and a few others. She’ll even pick up a wooden dumbbell, but is not quite reliable about giving it back to me yet.

Most miraculous of all, Cali seems to be on her way to charming big sister Jana. She is definitely the annoying little sister sometimes — clamoring for attention, bugging Jana to play, appropriating Jana’s bed and toys. But, yesterday morning, something momentous occurred. Jana asked Cali to play. The two romped and tugged with her for a few minutes before Jana remembered her older-dog dignity and her opposition to puppies and went back to bed. The puppy tires her out too! 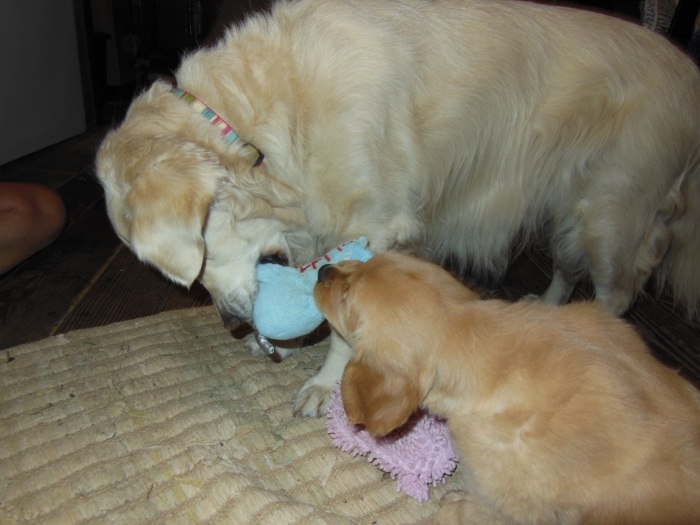