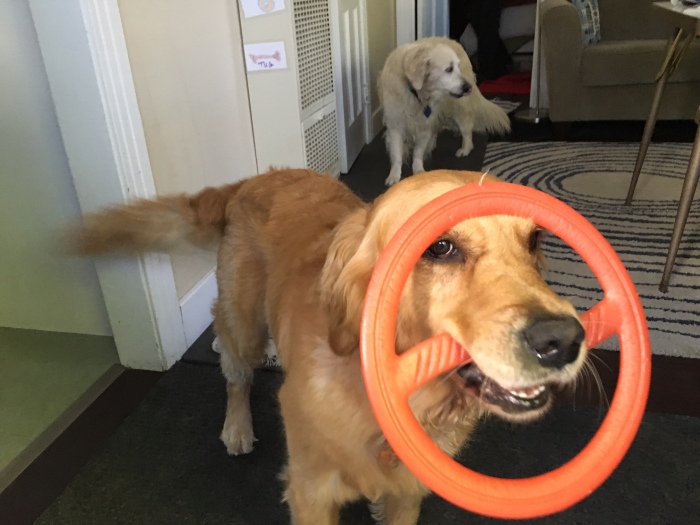 Ever since the day that Cali growled at Barley over her ball, I have been thinking about this power struggle that Cali and I were engaged in. Though she seems to have won significant ground (see She’s Very Patient; or Is She Stubborn?), I am still trying to come up with the right resolution for this issue.

Cali clearly wants to play ball. At the park. Walks are OK, playing ball at home is OK in a pinch, but playing ball at the park is her one and only heart’s desire. She also wants to be sure that no other dog will take her precious ball.

I want Cali to get exercise, which does not happen when she is lying in the grass holding her ball. Walking on a leash is fine, but it does not provide enough exercise. Running after the ball is Cali’s favorite (and most effective) way to exercise.

How can I reconcile these sometimes-competing goals?

I seem to be on the right track with playing off to the side of the park, away from other dogs. It is not foolproof, but Cali does seem to be getting the idea that I know that I need to throw the ball away from all other dogs. I don’t throw it where other dogs are playing ball. Sometimes the action moves ominously close to Cali and her ball, but we’ve been pretty successful at avoiding social contact during our ball games. And she’s getting better and better about giving me the ball to throw again.

I happen to like the other people and dogs at our park, so, after a few throws, when Cali is hoarding her ball, I wander over to say hello. Jana wanders over, too, to see if anyone has forgotten the rules and perhaps brought a little cookie for her in their jacket pocket.  I’ve tried taking the ball back from Cali before my social hour, but it doesn’t work. She sits next to me, poking my hand or the bag where the ball is and bugging me to throw it.

Now I just let her keep the ball when I head off to be social, but I do watch carefully and if dog play seems to be spilling over into her corner of the field, I run interference. Sometimes, Cali even comes over to where I am, ball in mouth, and says hi to her favorite people. I can tell that she’s feeling more confident about the park people (and dogs) because, a few times, she’s actually given me the ball to throw when I was standing near other people and even dogs!

It feels like we are reaching consensus; hammering out a routine that works for all of us.

Our next area of conflict: what to do when it’s time to go home. Cali will often dig in her heels and refuse to move. If I can pry the ball from her mouth, she will follow me (and it) out of the park, then carry the ball home. But getting her to either leave willingly or give me the ball is still a struggle. When Jana was of an age and immaturity level to try out tantrums like this, all I ever had to do was walk about 10 feet toward the exit; Jana would always come running. But Cali would be perfectly happy if I left her at the park and just showed up to deliver meals and belly rubs several times a day, so “threatening” to leave her there isn’t a viable strategy. There are not enough hours in the day to wait her out. So I am still puzzling this one over. Suggestions are welcome!

4 thoughts on “Thinking about Play”