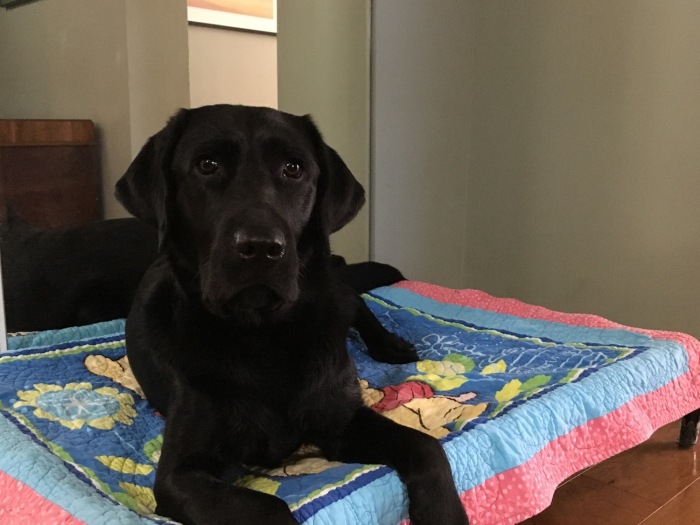 I wrote last week’s post on Koala and her reluctance to move to a big-girl bed a few weeks before it was published. Since then, she went on a long visit (with Deni of course) to Deni’s mom’s house. There, she did not have a crate. And, she decided, upon returning home, that she was ready for her grown-up bed. She wouldn’t even look at the crate. Crates are for babies, she said. Why would I want one?

The crate is gone.

I think it is more about choice than about where Koala sleeps. She wants to — and should be able to — make choices about things that affect her quality of life (to a reasonable extent, of course … Cali does not get to do the grocery shopping, for example, and neither does Koala).

I’ve had an interesting email conversation over the last couple of weeks with a reader who has taken her dogs’ communication and ability to make choices to an unusual level. She uses an approach similar to what I have seen a few other people do, which is to present two options and have the dog choose a hand. Left for yes, right for no, or left for “go for a walk” and right for “play ball.” Things like that.

I have not taught this to very many dogs, but Jana and Cali picked up the idea pretty quickly. Cali’s favorite daily choice is between two tennis balls (yes, she’s a bit obsessed). Our morning routine goes like this: Walk to the park. She skips and dances ahead and has to be reminded not to pull. As we get close to the gate she literally wriggles with joy and excitement. She gets to the gate first and stands at attention, touching the gate with her nose. I open the gate and reach down to unhook her leash. She bounds into the park, turns and sits, looking eager and expectant. I pull the Chuckit and two tennis balls out of the bag. I offer her both balls. She sniffs each one deeply, sometimes wavering, then makes a choice. She watches carefully to make sure I don’t pull a fast one, swapping the balls. I put the rejected ball away, slip the chosen ball into the Chuckit, and throw.

Occasionally we have a variation: She somehow gets hold of a ball at home and carries it to the park. I throw that one.

She always carries her ball home from the park.

The point is that, along with getting to play her favorite game, (which is not what you think) she gets some control over that game. The game, by the way, is not fetch or catch. It’s: Run after the ball, grab it, then keep it away from everyone else, human, canine, avian, or whatever, in the vicinity. Occasionally let a human get it and throw it again. Repeat for as long as you can get the humans to cooperate.

Anyhow, in addition to that, Cali gets to choose. She takes her choice very seriously. There are other choices in her day. She occasionally gets to choose between two treats or two games; she might get to choose whether to go for a walk or have a play session; she often gets to choose which direction we go on a walk. But really, she doesn’t have that many choices in her life. The few areas where she gets to exercise some control are important to her. I think that’s true for Koala as well. And for every other intelligent creature, canine or otherwise.

One thought on “In Her Own Time”